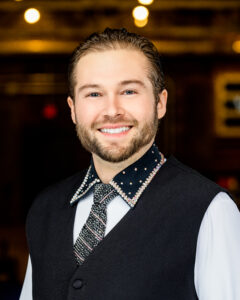 Steven Grindstaff was born and raised in Johnson City and is the owner/manager of Apex Window Tinting. Previously, he managed the Grindstaff Kia store on the Bristol Highway. He was there for 7 years, contributing to the store becoming the top volume Kia store in their market. His hobbies include competing in racing competitions in eastern United States (when he has time!) and collecting sports memorabilia. He is married to Taylor Grindstaff and currently lives in Piney Flats. He was a tribute dancer in Dancing With the Tri-Cities Stars years ago as a substitute for his father after an injury and has looked forward to participating again!