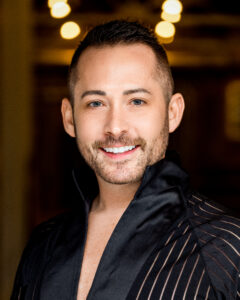 Andy Smith was born and raised in Richlands, Virginia. He has called Johnson City home for the past 19 years. He graduated from Richlands High School in 2002, and a year later moved to Johnson City, where he attended Tri-Cities Beauty College. Upon completion, he received his Tennessee state license to start his career as a nail technician. He has worked locally doing nails for 17 years. He currently works at Decorum Salon in Johnson City. He has developed many wonderful relationships with his clients over the years, and he considers them more like friends and family than clients. He says it’s more than just a manicure or pedicure; it’s therapy, for them as well as for himself. Andy is extremely happy and honored to be participating in this year’s event. He feels Jeremiah School is a fantastic organization and that we are lucky to have them here in our area.

When he’s not at work, Andy enjoys spending time with his partner Justin and their fur baby Lilly. He is a self-admitted Real Housewives fanatic (seriously he knows everything about these women)! He also enjoys traveling anywhere with a beach and sunshine! He also never turns down a trip to Disney! Good luck to the other 2022 Stars. Let’s have a great time, make new friendships and raise some money!